January 17, 2020 in Leaders from History, National Leave a comment

Benns: Give us a hint about two or three things you write about in Cold Fire that may surprise Canadians and Americans alike.

Boyko: Many readers will be surprised to learn of the enormous pressure President Kennedy exerted on Prime Ministers John Diefenbaker and Lester Pearson to ignore Canadian interests in the adoption of his policies. This attitude led to Kennedy’s interference in two Canadian elections that contributed to the government’s defeat. Readers will be surprised to see that while Canadians at the time were enthralled with the young president, he was treating Canada more like a satellite than ally.

Some have argued that the bad relations between Canada and the United States during the Kennedy years were due to the president and Diefenbaker disliking each other. However, many will be surprised to learn that while the personal enmity was real, it was based more on the two leaders pursuing very different and equally legitimate goals. Kennedy was more than the charming leader people loved and Diefenbaker was much more than the dithering anachronism that people rejected.

I think Canadian and American readers will be surprised by military matters at the time. For example, they may be shocked to learn of the role that Canada’s military played in the Cuban Missile Crisis for while the world was focussed on Cuban waters, the Canadian navy and air force was playing a key role in the defence of the American Atlantic seaboard. Readers will also be surprised that while Kennedy urged Canada to place American nuclear weapons with its Canadian-based missiles, that he saw them as mere decoys, there only to draw Soviet fire away from the United States.

If I can add a fourth, I believe readers will be surprised to see how much that happened in those years and the lessons that can be derived from the issues addressed continues to resonate today. 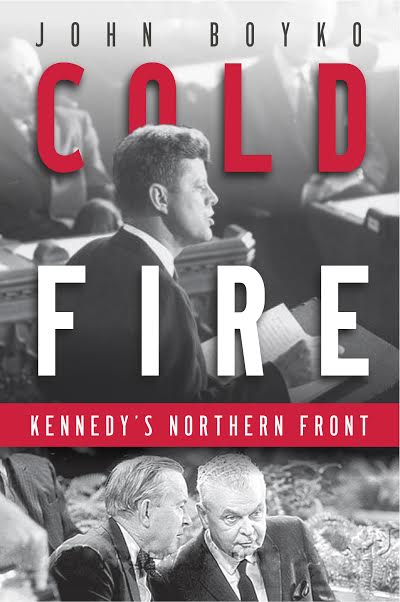 Benns: To my knowledge, this is your second book (Blood and Daring being first) that indelibly links Canada and the U.S. in ways that haven’t been fully tapped before. Is this a theme you are interested in continuing to explore – the political and historical connections between our nations? If so, why?

Boyko: Canadian Social Credit leader Robert Thompson once said in the House of Commons, “The Americans are our best friend whether we like it or not.” The United States is Canada’s neighbour and the world’s most powerful country and so every fad it follows, war it wages, and political or economic rabbit hole into which it descends, affects Canada. Canadians can fight it but can’t deny it.

This reality fascinates me and so for my last two books I have explored the relationship, first in the 1860s and then in the 1960s. My next book will explore an equally influential decade between the two.

Benns: Why do you think Kennedy holds such fascination for Canadians? Do you see any parallels as you watched Justin Trudeau rise to power in Canada?

Boyko: Kennedy did not invent the celebrity politician but he was the first to exploit looks, charisma, and a photogenic family in the TV age. The 1960 campaign swung when he beat the more experienced but less-media savvy Richard Nixon in TV debates. Kennedy confessed that he would not be an effective president or possibly even have become president without television.

A journalist once wrote of Canada’s 1968 “Trudeaumania” election: “Canadians had enviously watched the presidency of John Kennedy, and continued to wish for a leader like him.” Last year, Canadians watched Trudeau’s son ride a wave of Kennedyesque celebrity while Nixon-like opponents attacked his appearance and gaps in his policies and resume, all the while forgetting Kennedy’s lesson. And now Trudeau commands, Donald Trump confounds, and Kevin O’Leary considers.

A question that is asked throughout Cold Fire is whether our leaders must now also be celebrities?